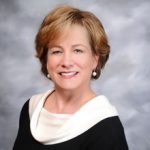 Lynn serves as Parman & Easterday’s Director of Client Services.  Additionally, she is Mr. Parman’s executive assistant, coordinating the challenging demands of the busy President and CEO of the law firm.  Since joining Parman & Easterday in February 2015, she has undertaken a variety of other roles, including assisting with some of the firm’s marketing and accounting duties.

Lynn’s introduction to the legal profession began in her early 20’s when she held an official court reporter position with Oklahoma County District Judge Jack R. Parr.  She continued that interest taking depositions as a freelance reporter, while earning her bachelor’s degree, partnering in a start-up retail business and raising a family.  After her three children graduated from college, she began service to the state of Oklahoma, serving as a legislative assistant to State Senator Greg Treat.  She then joined the Secretary of State’s office and served as executive assistant to Larry Parman when he was appointed Secretary of State.  When the governor appointed Mr. Parman as Secretary of Commerce, she joined the staff at the Oklahoma Department of Commerce as a Director of Administrative Services.

Lynn, and her husband Bill have two sons, William and Travis, and a daughter, Emily.  She is a lifelong member of Westminster Presbyterian Church and a sustaining member of the Junior League of Oklahoma City.